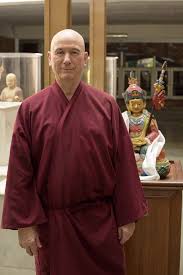 Swami Tat Sat Bharati (formerly Ingo Beardi) is a direct student of Swami Rama and Swami Veda Bharati. He was initiated into the Himalayan Tradition by Swami Rama in 1987 and received his ordination as a Swami by Swami Veda in 2005 as well as his initiation to become an initiator himself. He lives in Berlin, Germany and is the founder and director of the Institut für Yoga & Aikido.

Swami Tat Sat connects seamlessly the philosophy of Yoga with Aikido, a form of martial arts which represents a unique synthesis of Samurai and the Shinto Shingon Budhhism. Next to a 7th Dan master of Aikido he is a highly developed meditator and yoga practitioner/ philosopher. On this basis Swami Tat Sat has a profound understanding of the path of Samadhi as it is described in the Yoga Sutras of Patanjali. He is able to explain its subtle messages so that we can apply them to our daily struggles with our surrounding and within ourselves. He builds the philosophical bridges to Buddhist knowledge and Kashmiri Shaivism about living, dying and reincarnation and is able to transmit his extraordinary mental clarity in the process of meditation.