Mahamandaleshwar Sri Swami Veda Bharati ((1933- July 14, 2015), was a rare Sanskrit scholar of our time, unsurpassed in his profound depth of knowledge, philosophy and practice of Meditation. He was born in a Sanskrit-speaking family and raised in the centuries old Vedic tradition. He taught the Patañjali’s Yoga-sûtras for the first time at the early age of 9 and the Vedas from age 11. Having never attended any school, he received his M.A. from the University of London and a D.Litt. from the University of Utrecht in the Netherlands. 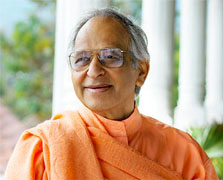 In continuation with the oral tradition of the living lineage of the Himalayan Sages, Swami Veda taught: yoga samâdhi | Yoga = samadhi | Yoga [is] samadhi. He proposed that the entire yoga science must be studied and practiced on the basis of this definition of yoga. All other definitions are subservient to it. He revealed the authentic teachings of Classical Yoga through his 1500 page commentaries on the (first two chapters) Yoga-Sutras. This commentary has been hailed among scholars and practitioners both as the most authentic and authoritative.

He has recorded more than 3,500 hours of courses on all aspects of meditation, its texts, and philosophical systems apart from teaching the ancient texts like the Vedas, Upanishads, and the Bhagavad Gita in an experiential context for meditation. Following on the footsteps of his Guru, he maintained a keen interest in the scientific studies of yoga mediation and subjected himself to a number of researches in the field of Neurophysiology of the Meditative states.

Swami Veda Bharati emphasized the universality of yoga as a science, which transcends chronological time, geographical boundaries, religious discrimination, and manmade sectarianism. Although he always liked to keep a low profile, he was well known for his teaching in different communities and cultures all over the world and for his expertise in instructing students in accordance with their own religion-philosophical background. During his lifetime, he participated in numerous interfaith dialogues, activities, and conferences with an aim of improving understanding among various religions. He found the experience of meditation to be the common ground among all religions. Prepared on the occasion of the United Nations 2000 World Peace Summit of Leaders in Religion and Spirituality, his short work, “Unifying Streams in Religions,” provides a fresh perspective for bringing the different faiths closer together.

In 2002, he founded Swami Rama Sadhaka Grama in Rishikesh, which houses the headquarters of the Association of Himalayan Yoga Meditation Societies International (AHYMSIN) and serves as the centre for his global network among nearly 100 groups in 26 different countries; spreading the teachings of the Himalayan Tradition. We can best repay his extra-ordinary efforts by availing ourselves of the fruits of his experiential teachings to further our own yogic practice for our own enlightenment and the welfare of all.